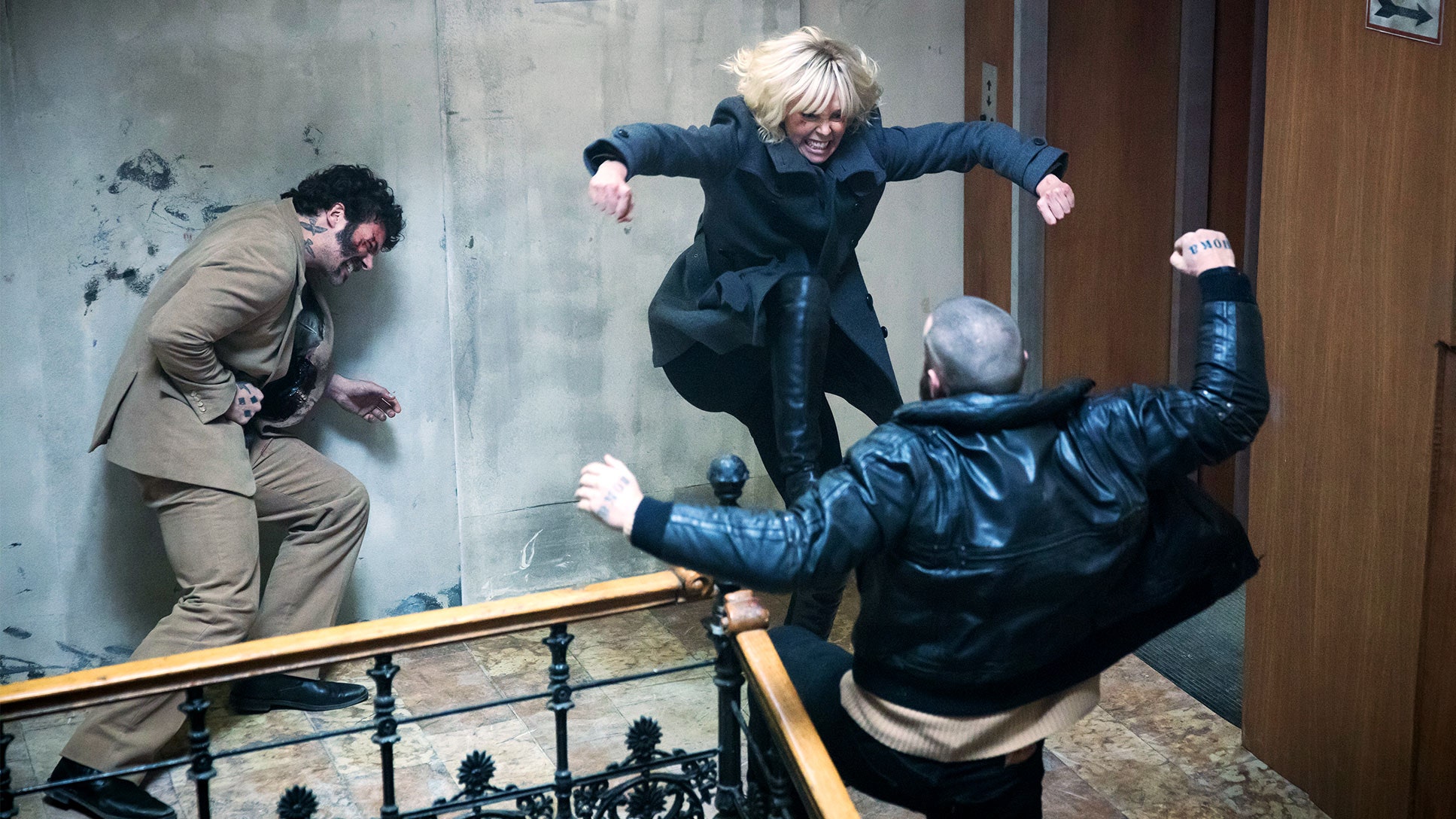 This month alone I’ve been witness to two of them, the now-ubiquitous female-led action film laden with hand-to-hand combat and martial arts: Gunpowder Milkshake, a Netflix original headlined by Jumanji’s Karen Gillan as an assassin with a heart of gold, and Amazon’s Jolt, a Prime original headlined by forever-young Kate Beckinsale as an erratic badass out for revenge after her lifeline of a boyfriend turns up dead. And there are more to come: Mary Winstead in Kate, another Netflix original, and Halle Berry as a mixed martial arts maven in Bruised. Despite its middling box office, this is the legacy of Atomic Blonde, the 2017 spy film starring Charlize Theron in some of the most visceral, violent, hard-hitting fight sequences to every grace the screen. John Wick might have reinvigorated the hitman hero flick, but Blonde traded guns for battered fists and was arguably better for it. Now, as Hollywood is wont to do, there are copycats aplenty, one of them a fitfully entertaining if overly familiar stab at the genre, the other a rather mundane attempt saved by a glorious cast.

This violent, very British undertaking is undoubtedly one of the most schizophrenic movies I’ve ever seen. The first hour is borderline atrocious filmmaking, from the distracting UK-style higher frame rate photography to incredibly random comedy of a demented Cockney kind (a doctor for wounded assassins is straight out of a quirky episode of Sherlock), there’s not much to recommend beyond a neon-lit bowling alley fight that doesn’t live up to such a concept’s very high cool factor, and the promise of more to come from Angela Bassett, Carla Gugino, and Michelle Yeoh. Paul Giamatti is mostly wasted as a facilitator for Karen Gillan’s company of assassins, a desk jockey with nothing to do but calmly reprimand his insubordinate protégé over the phone. An opening scene setting the stage for an oedipal struggle between daughter and mother (Lena Headey) doesn’t exactly whet your appetite for more of the elder actress given its awkward framing and lack of context. Too often filmmakers forget that an audience needs context in order to care about such emotional baggage. However, the film’s second half almost makes up for it entirely. A creative and hysterically bloody fight scene in a doctor’s office between Gillan, currently lacking use of her arms, and a gaggle of hapless goons is a particular highlight. And the inevitable clash between former killer-for-hire and hiring firm, all set in a vast underground library and featuring the aforementioned ladies of a certain age, is one deliriously entertaining extended action sequence, with Gugino able to add a bevy heart to the film with a single look. It’s not Atomic Blonde, but it’s worth a look anyway. Try to ignore the orange and silver bowling jacket that is clearly a riff (or rip-off) of Drive’s iconic scorpion jacket.

In the middle of quarantine 2020, Tanya Wexler’s previous film Buffaloed was like a breath of fresh air, a hard-edged comedy moving at high velocity, with a bubbly, venomous lead performance by Zoey Deutch keeping up with it every step of the way. That film was an unexpected joy, and prophesied good things to come for its up-and-coming filmmaker. So it pains me to write that her follow-up, Jolt, is a mediocre exercise in revenge plotting, feminine ass-kicking, and feminist themes. With the latter briefly shoehorned and the former an after-thought given the narrative, about a raging former military bad-ass out for blood when her boyfriend (Jai Courtenay) of *two dates* winds up dead, the film is mostly just ass-kicking. And the action scenes are simply not up to snuff, with the exception of one banger inside a masochistic corporate lab. Jolt is mildly entertaining for one reason: its sterling cast. Kate Beckinsale is a bonafide movie star, no matter the actual talent underneath, and she’s surrounded by Stanley Tucci, Bobby Cannavale, and Mr. Filch David Bradley, a who’s who of great character actors. Bradley gets a juicy little monologue about lobsters that had my eyes peeled, and Tucci is like the father you never knew in nearly every role. Courtenay is believable as the perfect man, less so when he turns out to be not-so-perfect. Such a baby face doesn’t translate to such a role less you rough him up a bit (Suicide Squad) or give him less to do. Courtenay’s good, but he’s not good enough to play a Machiavellian type. The biggest takeaway here is the revelation that there is such a thing as an excess cortisol disorder, which Beckinsale’s character suffers from and is the catalyst for her needing a bodily contraption she uses to shock herself whenever violent fantasies occur to her, hence the title.