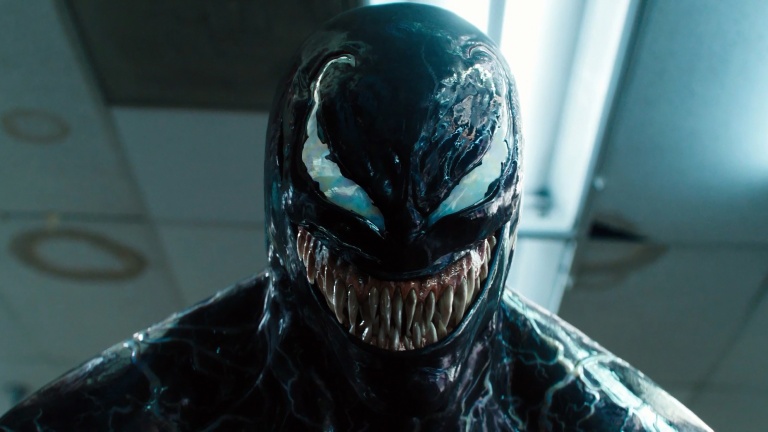 Tom Hardy loves dogs. I love dogs. Most human beings love dogs, but not one of us would be caught dead touching, smelling, tasting dog shit. Normally this dog shit soliloquy would continue, eventually revealing itself to be a dog shit metaphor. You know, for just how terrible Sony’s Venom turned out to be. However, I’ve been reading and I’ve been ruminating and apparently it’s uncouth and ill-advised to come down so hard and with so many insulting barbs when talking about art, no matter how ill-begotten. So I won’t go there, but here’s the thing…this movie ain’t art.  It was never intended to be. Venom was intended as first-rate entertainment from the studio that brought you Sam Raimi’s original Spidey trilogy. Remember those? The good one, the great two, and that unfortunate three? I bring them up for one reason: Venom reminds one of a time when studios fucked up comic book adaptations on the reg. Between 1997 and 2007, a Raimi Spidey or Singer mutants were rare. Most of the time you had leather-clad devils and devil-riders set to Evanescence and directed by Mark Steven Johnson, or a woefully miscast Fantastic Four gallivanting and cracking wise around Manhattan to the tune of financial red ink. Venom is like that, an awful throwback and might have been the worst movie of the year were it not for Tom Hardy.

Liar Liar comparisons are a bit much, but damn is Hardy a committed man. He dances, dives in a lobster tank, and single-handedly makes some of the dark comedic bits land, almost making up for the dearth of anything interesting in the rest of the movie. His Eddie Brock is a schlubby cable network reporter whose nosy antics get him fired when he fires off too many questions for San Fran’s ethically-challenged tech icon Carlton Drake (Riz Ahmed), an obvious stand-in for Elon Musk. To add insult to career injury, he’s dumped by his live-in girlfriend (Michelle Williams) and left to fend for himself in a seedier part of town where the neighbors knock boots and bang drums all hours of the night. It’s all so rushed and full of thin lip service there’s no time to learn about who he is or why he cares about journalism or even said girlfriend. It’s all over and now there’s a contrived opportunity for him to come face to gooey face with a symbiotic organism from space. Ahmed is one-note in a two-dimensional role as the corporate giant-turned-riot of a supervillain. He’s not a good riot, he’s a bad guy named Riot. We know because he’s completely devoid of charm when layin’ on that public crusader fluff in Q&As with young schoolchildren, and likes to drone about saving the world from climate change and overpopulation, a villainous character trait quickly becoming a new cliche. If I didn’t know any better I’d think Hollywood actually hated climate change crusaders.

But this ain’t art, right? This is entertainment, and audiences aren’t in it for calculated performances or thoughtful writing, they’re in it to see dog shit go dynamite. Ultimately that’s why Venom is a failure. Save a few funny one-liners and a Brock-Venom bromance that could’ve been something in a better script, this is the farthest from first-rate entertainment, so much so that I can’t recommend a single action sequence. Director Ruben Fleischer and producer Tom Rothman (notorious for taking scissors to many a superhero) have cut this film to pieces, including the very visual effects-heavy dust-ups they presumably wish to flaunt. Their editing here is choppy, chaotic, and altogether messy, rendering any and all action either dull or dangerously close to non-existent as you barely have time to process one beat before they’re onto the next scene. And don’t even get started on the so-called romance, a chemistry-free lesson in how not to handle your extraneous relationship fodder in a comic-book movie. Michelle Williams is a great actress, but she’s saddled with the most thankless thankless girlfriend this side of Eva Mendes. But thank god for Tom Hardy and whoever decided to let him sink into some of these funny body-horror moments, or the back-and-forths between him and man’s new best friend. Sorry, dogs, Tom Hardy loves the symbiote now.