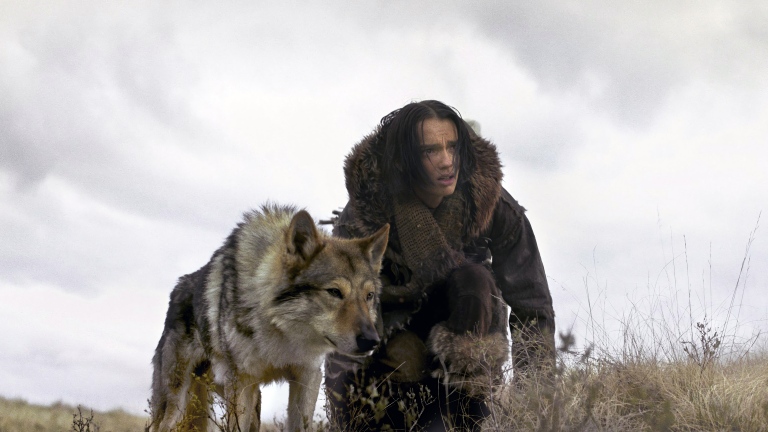 I’m a sucker for a dog movie. “Marley and Me,” “A Dog’s Purpose,” you name it, I’m down for it, regardless of mediocrity. As a dog lover it takes only the slightest provocation to get those tear ducts misting, and “Alpha” is no exception. From Albert and Allen Hughes, the former provocateurs-turned-studio-for-hire filmmakers, it’s a mythic action-adventure epic set in the Upper Paleolithic period, essentially the ice age, when man and beast still roamed the earth side by side.

Kodi Smit-McPhee is Keda, a young man beset by fear when facing down wild buffalo or the prospect of slicing a boar’s throat. He’s not like his hard-nosed father, he’s a gentler brand of human, a proto-Millennial in spirit. After a bruising accident with said buffalo, he’s left for dead on the perilous face of a large plateau. Struggling to make his way home on a broken foot and a frozen tundra, he forms a special bond with an injured wolf separated from her pack. Que the awes and oohs at such meet-cute moments like the first-ever doggy bowl and maybe the first time ever a human being hath scorned a begging dog. Their friendship is uneasy at first, the natural course of things when dealing with an untamed, carnivorous animal. Eventually, through the tug and pull of trust, they become partners in nature, hunting food and fending off the elements together. Keda’s family dynamics and personal character arc are basic mythical tropes, tracing a young man from helpless teen to self-sufficient man of the wild, but despite the underwhelming buzz and overwrought 3D pedigree, “Alpha” looks like a couple hundred-million bucks. Long stretches were shot on location in Iceland among the very real icebergs and barren landscapes and it shows. The brothers aren’t shy about flaunting their visual acumen, nor the vicious brutality of life on the prehistoric range, where hyenas, panthers, and ice itself are on your heels at every turn. Maybe that would explain the oft-confused marketing from a studio that seemingly can’t make heads or tails of a dog movie with real stakes, blood n’ all.

From “From Hell” to “The Book of Eli,” the Hughes brothers have been underrated Hollywood talents, sidelined by media for their mercurial fussiness more so than a lack of skill. Allen has written and Albert has wrought a gorgeous-looking throwback to the adventures of old, an occasionally simplistic and too-brief boy-and-his-dog tale that easily gets by on those ever-reliable charms.